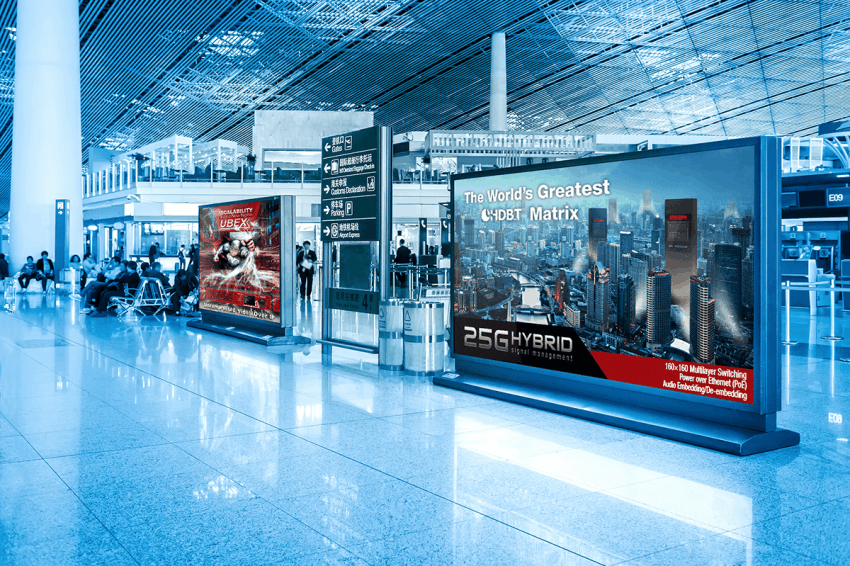 Nowadays, it can be difficult to get your business well and truly ‘out there’. With so many ways to advertise it can be difficult to decide on which one is the right choice for you and your brand. If you’re searching for a fresh, interactive and engaging way to attract new potential clients to your business, then look no further. Digital signage campaigns are an excellent and accessible way to improve your outreach.

These eye-catching advertisements are an excellent way to make sure your business stands out from the crowd.  If you’re wanting to advertise with a good digital sign display, then look no further, as EOOKE is the perfect place to get the perfect digital sign to help you take your business to the next level. And if you’re still not sure, here are 6 examples of innovative digital signage campaigns that worked well.

Considering James Cameron’s Avatar was a technological breakthrough in filmmaking that took over a decade to make, it makes sense that when advertising the film, Cameron spared no expense. His team took their time constructing a beautiful and immersive advertising campaign allowing the viewer to get a glimpse into the world of Pandora. Considering how successful the film became, it’s clear this advertising campaign certainly played a big part!

Love Has No Labels

In March 2015, Love Has No Labels, a movement designed to promote inclusivity and acceptance among people of all ages, races, abilities and genders, launched their first digital signage campaign that skyrocketed their movement into the public eye. The digital sign saw a variety of couples walk up towards each other and embrace, however, the screen only showed them as skeletons. After they embraced, the pair would walk out revealing a variety of ages, genders and races. The campaign proved that love has no labels as we are all the same on the inside.

With the imminent release of a new edition of the horror film, The Grudge, the makers of the film were searching frantically for a new, clever way to advertise their film. After months of deliberation, one of the team had an excellent and devious plan to spread the word about the new film. In a bid to truly immerse potential viewers (or unsuspecting victims – whichever way you choose to look at it), the team set up a digital advertisement. Unsuspecting people would be sat beside a digital advertisement for the grudge and when they weren’t looking, the screen would be lifted, and an actress dressed as Samara would crawl out of the screen like the film and terrify people.

An older, yet still effective ad, Kleenex used digital signage in order to advertise their brand. They focused their advertisement on mothers. The interactive screen featured mothers of all different ages and ethnicities all giving reasons on why they should be chosen to advertise for Kleenex. Once one was selected, they would give their personal story and opinion on why you should buy Kleenex. A simple, yet effective way to get people more engaged about their brand.

Another film taking advantage of digital signage campaigns was the 2009 sci-fi film, District 9. Alongside a comprehensive online advertising campaign, much like Avatar, the goal of District 9’s advertising campaign was to immerse potential viewers within the world of the film. The films conflict stems from the segregation that develops between humans and a society of aliens that become stranded over Johannesburg, Africa. They made use of digital signage by screening documentary style broadcasts about the alien invasion, leading many people to believe it was happening!

More of a comedic example, it still worked well in attracting attention. Originally designed as part of a James Bond exhibit and similarly an indirect advertisement for the Jaws franchise, unsuspecting members of the public were taught a terrifying lesson on why you shouldn’t tap the glass of exhibits. People would walk up to glass, like an aquarium, deep underwater. The water would appear empty, but moments after you touch the interactive screen, a great white shark swims towards the glass, ‘cracking’ it. The person would then, naturally, collapse in fear as onlookers burst into laughter. A popular prank, it has brought in many more visitors to the museum each year.